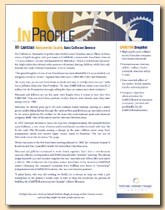 “CARSTAR prides itself on adhering, to and maintaining three key principles: ethics, standards and consistency."

In this issue, read about how Sam Mercanti, CARSTAR’s CEO and President, and Larry Jefferies, Executive Vice-President, set out to build a coast-to-coast - 10 provinces in 10 years - franchise system of high-quality, profitable collision stores.

On Halloween, thousands of goblins and witches roam Canadian streets. Many of them carry a FrightLites glow stick purchased at CARSTAR, a nationwide franchised chain of 115 auto collision centres, headquartered in Hamilton. This is a real win-win situation: the bright sticks alert drivers to the presence of excited, darting children, while their sale benefits the Cystic Fibrosis Foundation (CF) of Canada.

“The granddaughter of one of our franchisees has been affected by CF, so we made it our company charity of choice,” explains Sam Mercanti, CARSTAR’s CEO and President.

“In many ways, we see our franchisees as family and step in to help when we can,” adds Larry Jefferies, Executive Vice-President. “To date, CARSTAR has raised more than $1.2 million for the Foundation through selling the lites, car washes andother initiatives.”

Mercanti and Jefferies are on the same wave length when it comes to how they view CARSTAR. They are more than partners. In fact, they’ve been friends since they were young men in 1966.

Mercanti, 59, literally grew up in the auto collision repair business, starting as a detail person and working his way through the ranks at Mercanti Brothers, an operation owned by his uncles. Jefferies, 60, worked for 28 years with multi- national paint and chemical company BASF. One of his clients was the Mercanti Brothers shop.

In 1972, Mercanti decided to make the leap into entrepreneurship. He opened Ontario Auto Collision, anew chain of stores and invited family members towork with him. Yet by the early ‘90s, Mercanti, sensing a change in the auto collision sector away from independent stores and toward larger chains, opted to franchise. “We ran out of Mercantis to run the locations,” he quips.

Within two years of the first franchisee coming onboard in 1992, the company boasted 8 locations and had expanded outside the immediate Hamilton area.

Mercanti and Jefferies continued to work closely together. Each time a new location opened, Jefferies, in his position with BASF, basically did a “turnkey” opening. “He almost single-handedly put each location together for me,” says Mercanti. When Mercanti inked a deal in 1994 to become the Canadian master franchisee of the American CARSTAR system (changing the company’s emphasis from building new stores to “converting” independents into CARSTAR locations), the two men became partners.

“I asked Larry, who was still working for BASF, for a favour; to help me write a job description of the person I would need to hire to help me accelerate the process of building the CARSTAR system across Canada,” reflects Mercanti.

“I wanted someone who understands the auto collision business, understands Canada, could lead a team and would work his butt off.” After the description was completed, the two men sat back and looked at each other; in one of those eureka moments, it became clear: Larry was the perfect candidate.

Together, they set out to build a coast-to-coast - 10 provinces in 10 years - franchise system of high-quality, profitable collision stores. The chain promises customer satisfaction, which features a Lifetime Nationwide Warranty, cost containment, improved turn around time and consistency.

Looking forward, their vision for the next five years is ambitious, say the partners, but absolutely achievable. Their goals: to operate 200 locations coast-to-coast; double annual revenues from the current $141 million to $280 million, heighten brand awareness from a current high of 20% to 50%, and moreover, increase market share from 4.5 % to an impressive 10%.

To reach those goals, the duo has put together a team of more than 40 corporate employees. The secret, says Jefferies, is that “Sam knows what he doesn’t know and doesn’t hesitate to bring someone into the organization when we need particular skills.” They are also eager to introduce concepts that have been successful in other industries into the auto collision sector. For example, their Brampton franchisee runs a “kiosk”franchise in a newly-opened Toyota dealership in nearby Bolton. All the front office expertise, including the ability to give customers an appraisal – for any make of car, not only the Toyota brand - is handled right in the dealership, while the actual work is completed offsite in the franchisee’s store.

They are also counting on their relationships – some new and others in discussion stage – with major multi-national insurance companies. These companies are bringing “procurement” to the auto collision sector, insisting on best practices and measured processes they have developed in other countries, says Mercanti.

CARSTAR prides itself on adhering to and maintaining three key principles: ethics, standards and consistency. In fact, a sense of strong ethics underlies the entire system, an important element in achieving their goal of becoming the leader in the Canadian collision repair business.

Mercanti and Jefferies display personal leadership too. Mercanti, who Jefferies calls “an icon in Hamilton”, is Vice-Chair of St. Joseph’s Hospital in Hamilton and an executive volunteer with the Leadership Group. Jefferies is Chair of the Canadian Collision Industry Forum and past Chair of the Automotive Industries Association of Canada.

The two partners’ commitment to CARSTAR is absolute. “Let me demonstrate how much we believe in this business,” says Mercanti. “I have a daughter who is marketing manager and a son-in-law owns three franchises. Larry’s daughter owns a franchise.”