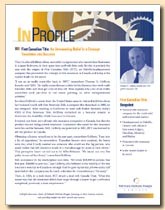 An Unwavering Belief in a Concept Translates into Success

Grifferty calls the company’s more than 1,000 full and part-time employees “the very best in the industry, whose ideas, suggestions and commitment are the real secret to our success.”

In this issue, learn about how Thomas H. Grifferty, founder and CEO of First Canadian Title, pioneered title insurance in Canada to become the market leader in its sector.

There is a lot of folklore about successful entrepreneurs who started theirbusinesses in a spare bedroom, in their spare time and with little cash. Yet this is precisely the case with the origins of First Canadian Title (FCT), an Oakville-headquartered company that pioneered the concept of title insurance in Canada and today is the market leader in the sector.

So when Grifferty’s cousin from the United States came to visit and told him about her husband's work with First American Title, a company that dates back to 1889, he was intrigued. After traveling to California to meet with Parker Kennedy, today's CEO of First American Title, Grifferty embarked on a four-year mission to determine the feasibility of title insurance in Canada.

It turned out there were already title insurance companies in Canada, but that theproduct was not being actively marketed. Consumers who opted for title insurance were few and far between. Still, Grifferty saw potential; in 1991, FCT was licensed to sell the product in Canada.

Obtaining a license turned out to be the easy part, remembers Grifferty. "I ran into a lot of opposition," he remembers. "Canadian lawyers were sceptical, the banks were too, what I really needed was someone who could see the big picture, who could realize that title insurance could be a real advantage for some of their clients.” That perceptive lawyer turned out to be Miles Feltmate. "We issued our very first policy to one of his clients," remembers Grifferty.

Still, acceptance in the marketplace took time. "We wrote $18,000 in policies that first year, $38,000 in year two,” says Grifferty, who believed in the viability of the title insurance concept in Canada so strongly that he gave up his day job two-and-a half years before the company was licensed, a decision he remembers as a “bit scary.”

Then, in 1994, in a bold move, FCT struck a deal with Canada Trust. "What this meant was that the consumer didn’t have to go through a lawyer to get are finance completed, previously a bank requirement.”

As is the case with many entrepreneurs, Grifferty found out that once a high-profile deal is made, opportunities follow. So many bank clients at Canada Trust opted for the title insurance process that other banks, to remain competitive, came onboard shortly thereafter and sales exploded.

Today, FCT, which is still wholly-owned by First American Title, is the leading provider of title insurance for residential and commercial real estate transactionsand other related products and services in Canada. In Ontario, for example, approximately 85 per cent of all real estate transactions are title insured, of which FCT has approximately 65 per cent market share. FCT’s annual revenues are in the $250 million.

Nationwide, the company also has offices in Vancouver, Calgary, Hamilton, Montreal and Halifax. Grifferty calls the company’s more than 1,000 full and parttime employees “the very best in the industry, whose ideas, suggestions and commitment to the company are the real secret to our success.”

To accommodate his dual roles, Grifferty, 52, aside from working in the company's international offices, splits his time between Canada and the US. An ardent flyer, he often pilots his own four-seat Cirrus as he travels between his homes in Oakville and in Palm Springs, California, the latter location less than a 2 hour drive from the First American Title headquarters.

There is a real sense among Grifferty and the employees that the company should give back to the community at large. This year, in what seems a natural partnership, the company is embarking on an ambitious program to support financially, and through hands-on involvement, the building of 10 homes for Habitat for Humanity.

For the past 10 years, FCT has been a sponsor of the "Breath of Life”, an annual event that consists of a series of downhill ski races held across Canada to raise money in support of The Canadian Cystic Fibrosis Foundation. It has also assisted other organizations such as the United Way of Canada, Canadian Cancer Society, Canadian Red Cross, Starlight Children's Foundation of Canada and Halton Women's Centre and Interim Place.

Hearkening back to the early days of the Canadian operation, Grifferty credits the company's growth to consumer enthusiasm and acceptance of the title insurance concept. And, as has been seen in recent highly publicized title fraud cases, neverhas there been such a need for consumers to obtain protection. First Canadian Title is active in consumer education; the company’s webpage on real estate title fraud, www.protectyourtitle.com, is a case in point, as is its involvement in the national Fraud Protection Forum.