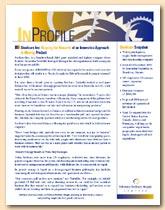 Reaping the Rewards of an Innovative Approach to Moving Product

“Never burn bridges with anybody you meet, in any situation, not just in business,”  suggests Tsafaridis, as a strategy for advancing in life.

In this issue, learn about how Demetrius Tsafaridis, founder of Steelcare Inc., quickly grew his third-party transload and logistics company and what his goals are for expansion.

Steelcare Inc., is a Hamilton-based, third- party transload and logistics company whose founder, Demetrius Tsafaridis, leveraged his expertise and experience to build a company that has grown quickly.

From startup sales of $600,000 in 1999, Steelcare has expanded its market reach into new initiatives that will enable it to “break through the $20 million mark in annual revenues” in fiscal 2006.

For more than a decade prior to opening Steelcare, Tsafaridis worked at steel giant Dofasco Inc. in Hamilton. Although pleased with his work, what Tsafaridis, now 43, really wanted, was to be an entrepreneur.

“One of my last jobs at Dofasco was in strategic planning,” he remembers. “I spent a lot of time in the United States, based out of Kentucky. A key component of that job involved travelling; I was able to visit 36 states. I saw how the U.S. uses its rail and river system far more than we in Canada use our lake and rail systems in transporting products.”

Drawing on the lessons learned at Dofasco, in addition to his educational background in business, Tsafaridis left what he describes as a “comfortable job” and opened Steelcare Inc.. Initially, the company operated solely as a warehousing service for steel products.

Steelcare’s first client was Dofasco, reflecting the good terms with which he left his former employer.

“Never burn bridges with anybody you meet, in any situation, not just in business,” suggests Tsafaridis, as a strategy for advancing in life. “I see this all the time playing sports, interacting outdoors or on the rink with people with whom you later find you have a business connect. They see you as a team player and consider you as an easy person to work with in business life.”

Today, Steelcare, with more than 135 employees, is divided into three divisions: the parent company [Steelcare Inc.] is the warehousing and transloading arm; Transcare Inc. is devoted to transportation and logistics, while Railcare Inc. focuses on rail car repair.

Its growth strategy is based on a three-pronged business philosophy that includes customer-pull; technological advancement; and operational excellence.

“Our customers pull us into new markets,” says Tsafaridis. “For example, we initially provided CP Rail with only railcar shunting services in our yard for their transload business. But they wanted us to expand our business relationship and services, so we added rail car cleaning and then we progressed into rail car repair.”

Similarly, Steelcare’s business relationship with Dofasco grew from being a transaction-based warehouse provider into an entirely new direction that clearly illustrates its technological advancement strategy, says Tsafaridis. “We designed a stateof- the- art warehousing facility for them, in addition to developing a fully- automated system to manage this building.”

His company’s ability to innovate is based, in part, on adherence to its operational excellence methodology, an integral cornerstone of Tsafaridis’ philosophy.

“In our case, this means being the best in the particular market we are in. We can offer our clients a range of services, from warehousing right through to designing a facility that is a complete solution,” he says. He notes that the needs of his top three customers -Dofasco, CP rail and Algoma Steel - have pretty much, until now, determined the direction in which he has expanded his range of services.

Still, Tsafaridis enjoys the challenge of developing new concepts and exploring new directions in which he can take his growing company. “I’m an ‘idea’ guy, my gears are constantly going. I look at every business meeting I have as an opportunity to develop something different. I’ve got at least 10 or 20 things in the air at any point in time and I hope to take two or three ideas and develop them into a new focus for the company to grow with,” he reports.

Tsafaridis is also exploring the possibility of lateral domestic development, expanding into Atlantic Canada, as well as westward into cities in Alberta and into Winnipeg. Both of these areas have well-developed rail hubs, essential for a company that relies heavily on a hub and spoke system of transportation.

And while Steelcare moves much of its customers’ products by truck, through an owner/operator arrangement, Tsafaridis has his eye on handling more product that is moved by water. “We support marine activity now through our facilities on the docks at Hamilton, storing products that someone else discharges,” he says.

He pauses; he’s mulling new ideas around in his mind; the idea man weighing the huge potential that moving product by water represents.